In the 1980s, aluminium became the prominent metal of choice for trams and high-speed trains. This improved acceleration and decreased running costs. In 1996, the TGV Duplex train combined the concept of high speed trains with that of optimal capacity. Transporting 40% more passengers and weighing 12% less, all thanks to its aluminium structure.

Today, aluminium metro’s and trams operate in many countries such as China which has the world’s longest High Speed Rail network with over 19,000 km of track in service as of January 2016, which is more than the rest of the world’s high-speed rail tracks combined. A network length of 30,000 km is planned for 2020.

The latest technology is trains made of aluminium foam. A material that’s stronger, lighter, and better in a crash than fiberglass or regular metal. Aluminium foam was invented in 1968, but the longstanding problem for using it in industrial applications was the difficulty of shaping the material.  Now, engineers have demonstrated aluminium foam surfaces can be formed economically using embossing tools.

Engineers in Chemitz, Germany unveiled a prototype high-speed train cab made with the aluminium foam earlier this year. The composite material is built like a sandwich: Between two pieces of aluminium, is a thick layer of the foam, composed of magnesium, silicon, copper, and aluminium. The material is 20 percent lighter than traditional fiberglass, which is commonly used on high-speed train cabs. 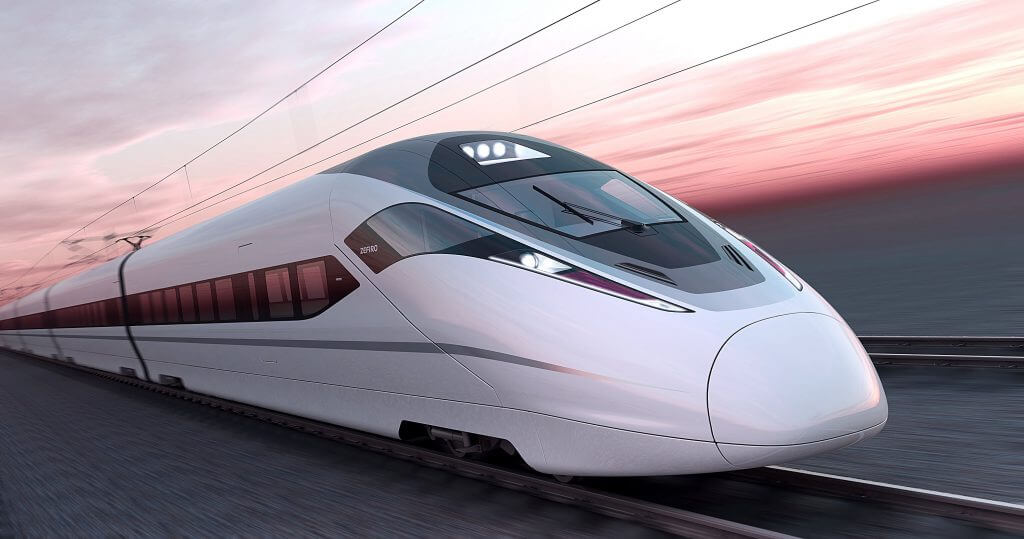 Exactly one year ago China and South America agreed to conduct a feasibility study of a 5,300 km transcontinental railroad that will connect Peru’s Pacific coast with Brazil’s Atlantic coast. This railway, known in Brazil as the Trans-oceanic Highway will cross the Amazon and the Andes where it will reach an altitude of over 2,500 meters above sea level and has an estimated cost of US$50 billion.

The Trans-oceanic Highway will decrease transportation time of goods and prevent raw materials from South America having to go through the Panama Canal, from where they currently take about 30 days to reach China. South America would benefit from the project by upgrading infrastructure.

The cost should be better defined when the preliminary economic feasibility study is completed, which should happen later this month. We are certain that the use of aluminium in this project will be prominent.

The future of railway transportation

It is clear that railway transportation and construction will continue to evolve. The various attributes of aluminium, especially its light weight, durability, and corrosion resistance ensures that aluminium sheet, extrusions and composite panels have a strong future in the development of rail transportation systems around the world. All available from Lodec Jinshu. Lodec Jinshu offers special prices on sheets and extrusions this month. Please contact us for the details of our offer.