Last month the Aluminium price broke through the US$1,700-per-metric-ton limit barrier at the LME – this is the highest price we have seen in the last 15 months. The same was true for the Shanghai Futures Exchange (SHFE) rising in November from RMB 14880/t to 15300/t in 10 days. A rising US dollar normally indicates a decrease in the price of metal but in October this was not true for the Aluminium price. 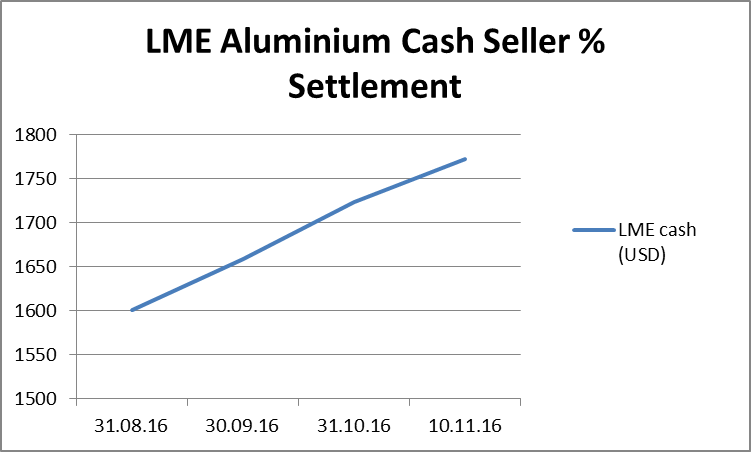 The increasing price is being attributed by some due to rising costs and a significant uptake in aluminium demand. However Reuters point to the LME warehouse reforms distorting Aluminium’s fundamental picture. The current situation is as follows:

Large Surpluses in the aluminium market

Rule changes to the LME’s global warehouse network have, as intended, cut the amount of metal trapped in storage.  Since 2013, the LME has implemented measures aimed at reducing queues for aluminium as it leaves warehouses after banks and traders that own them profited from letting long queues build up while charging rent.

The most effective measure has been to cap the rents. The rent payable on metal stuck in a queue longer than 30 days drops by half and after 50 days no rent is payable on LME metal. The rent capping is why so much aluminum has left the exchange. Warehouses don’t want the metal in case they have to store it for free.

Aluminium Supply and Demand is Distorted

Exchanges like the LME should reflect the reality of supply and demand, but the fact is all parties are not in possession of all the information. Reuters warn us that there is no shortage of global aluminum inventory. The drawdown in LME stocks is not a result of a tight western market.  It is a reflection of a distorted warehousing structure. The massive outflow of metal is creating a distorted view of supply and demand.